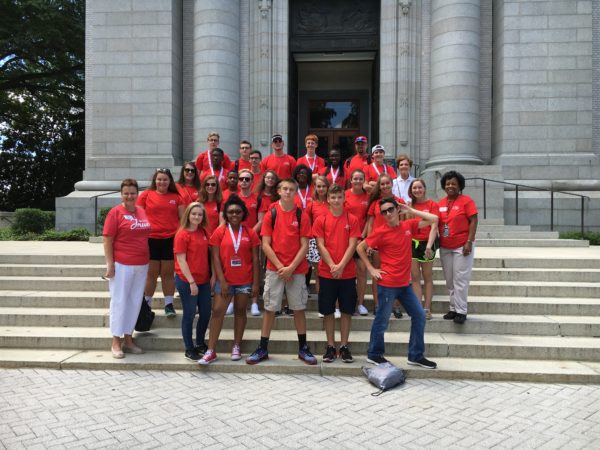 The second day was dedicated to leadership in public safety, meeting with Deputy Andre Mitchell from Calvert, Deputy Dan Baker from Charles, and St. Mary’s County Sheriff Tim Cameron.  The amazing discussion was followed by a visit to the Southern Maryland Criminal Justice Academy in Nanjemoy with lunch supplied by John Flatley (LSM’17 member and Chick-fil-A La Plata franchisee).  At the academy Keith Hicks provided a guided tour of the simulator, various training facility spaces, and shared the challenges the candidates experience while training for law enforcement careers as well as the qualities sought by law enforcement agencies.  While at the academy the teens learned of peer mediation and the impact it can have while communicating with fellow classmates.

The third day began with a presentation on public speaking by Bernie Wunder, Distinguished Toastmaster, from Calvert Toastmasters Club and included Delegate James “Matt” Morgan (Republican, St. Mary’s, District 29A), who gave a brief talk on his leadership journey from high school until becoming a Maryland State Delegate.  The teens then boarded a bus for a tour of the U.S. Naval Academy with Barbara Ives (LSM’09 and USNA graduate), John Felicitas (LSM’13), and Sharmella Riggs (LSM’15) as well a visit to the State House in Annapolis where they were given a presentation on How a Bill becomes a Law and were able to meet with Delegate Edith Patterson, (Democrat, Charles County, District 28), whose personal testimony helped the teens to learn more about leadership.

On the final day of the Teen Leadership Academy, the teens met Rear Admiral Tim Heely, USN Retired, who talked to them about effective leadership now and through their lifetime.  The teens finished their experience by presenting their own projects on how to be effective leaders. The projects can be viewed on the Leadership Southern Maryland website at: devaney.adminprotools.com/programs/youth-programs/tla-projects-archive.  Leadership Southern Maryland thanks all the amazing sponsors who made this such a successful academy – Askey, Askey & Associates CPA LLC, Chick-fil-A Foundation with their #trueinspirationawards grant, Chick-fil-A California franchise, Chick-fil-A La Plata franchise, College of Southern Maryland Prince Frederick, Karen and Jack Holcomb, The Patuxent Partnership, and Ridge Lion’s Club.