In the News Latest News:

Sue Greer is a self-described “military brat” who moved from duty station to duty station with her family until her father retired from the Air Force in the late 1970s. Raised in Charles County, he chose to return and the family took up residence in Port Tobacco, Maryland.  Greer went on to become an attorney and spent the first twenty years of her career representing government in roles including assistant state’s attorney, general counsel to the Charles County Sheriff’s Office, and deputy county attorney.  In 2011, life intervened and she left her government practice to run her husband’s law firm while he was deployed to Afghanistan.

It was after her husband’s return from deployment that Greer began thinking about broadening her horizons and learning more about Southern Maryland beyond the scope of her experiences in Charles County.  “In my various roles with government, I interacted with a large number of citizens, citizen groups, and other government entities,” she explained.  “I entered the LSM program with the confident belief that I had a broad grasp of the Southern Maryland community, its assets, needs, and the issues within the community.  I was quickly disavowed of this confidence and belief,” she said.  Greer realized that her extensive knowledge of the area she’d lived and worked in for years barely scratched the surface.  “I discovered so many hidden gems and opportunities,” she said.  “More than that, I was able to hear perspectives and views on issues that I had not previously heard.  The diversity of viewpoints and thoughts was invaluable.  There existed issues of which I was unaware”

Greer is now a sole practitioner in La Plata, Maryland at The Law Offices of Sue A. Greer, P.C. & Title Professionals Ltd.  Her practice focuses on land use, zoning and other real estate matters, as well as government affairs.  The title company division of her business conducts both residential and commercial real estate settlements.  Gaining a greater awareness of community concerns has benefited her in her work.  “The experience helped me view issues in my practice and for my clients differently and has been significant in helping me articulate my clients’ concerns or issues to others,” Greer said.  The Executive Program has helped her grow personally as well.  “The experience has caused me to work harder at listening and understanding other’s viewpoints and concerns before moving forward or coming to a conclusion.  It also inspired me to re-engage with my community to address the issues I saw.” she said

In addition to running her law firm, Greer is involved in a number of community organizations including the Charles County Chamber of Commerce, the Charles County Chamber of Commerce Military Alliance, Melwood, the March of Dimes, and her church community.  In her free time, she enjoys spending time with her husband, Will Greer, and two sons just doing “family things.”  She also carves out time to read suspense novels and take walks with her dog. 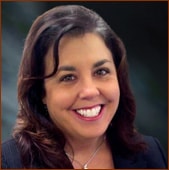